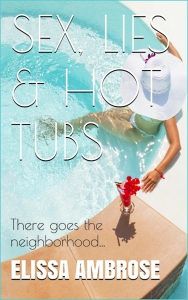 From Chapter 6
Don’t Let the Bastard Grind You Down

It all started two years ago when I arrived home from school and found a package on my doorstep. It was from La Femme Mystique, the racy new lingerie store that had opened at the mall. Even though it was addressed to Jeffrey, I assumed it was for me. Why else would he buy lingerie?

I had no reason to be suspicious. Our life had an easy rhythm, and I was content. I thought we both were. We’d hoped for a larger family, but when that didn’t happen, we’d adjusted. We went on, as families did. So even though Jeffrey was working overtime at the clinic and had a sideline in real estate, even though he spent one or two evenings a week with his racquetball friends, aka The Boys, I thought, as any trusting wife would think, that this gift was his way of saying, “I’m sorry I haven’t been there for you. This is to let you know I’m thinking of you.”

Eager to discover what my husband had bought to appease me, I tore open the box right there in the foyer. Lying on a bed of lavender tissue were red lacy panties and a push-up bra. The bra was strapless and patterned with pitchforks, the panties crotchless and sprouting wings at the hips.

Was Jeffrey getting religion or was he getting kinky? Was he saying he found our sex life boring? Maybe I wasn’t woman enough for my husband. “You have to be a whole woman,” my mother used to say. Would my father have stayed if she’d been whole? What did that even mean? I used to look at her and try to discern what part of her was missing.

Two red stripes pinched at my hips and chest. I was petite, but this outfit would hardly fit a Barbie doll. Not that I faulted Jeffrey—what man knew his wife’s dress size? I giggled when I saw myself in the mirror. I looked like a cross between a hooker and a barbershop pole. My giggling evolved into full-blown laughter and I couldn’t stop, even when I doubled over with pain. If Claire had been home, she would have gotten a never-before-seen view of her mother, and then she would have had me committed.

Come on! Was this what men wanted? Did women actually wear these things?

I noticed the envelope and came to my senses. The lingerie was a gift after all, and who was I to knock another person’s fantasy? Didn’t I have fantasies of my own? (They did not, however, involve Lucifer.) I plucked out the card:

My angel, my temptress, tease me, please me, make me yours. Wear this on Saturday. Waiting in anticipation, your Devil-May-Care.

On Saturday, Jeffrey would be at that dermatology convention in Flagstaff.

My laughter started up again, only this time it was born of panic. It came out as a constipated chortle, as if I’d read about an incurable disease and recognized the symptoms.

This weekend was the mother-daughter luncheon at the high school. He knew I couldn’t go with him to Flagstaff.

Not that he’d asked.

On the dresser sat several framed photographs, some of Jeffrey and me, some of just Claire, some of the three of us in various stages of family life. Aiming for the wedding photo, I hurled the box across the room and knocked over my bottle of Allure, a present from Jeffrey for my forty-ninth birthday. Drifting through the room, the overly sweet scent of lilac made me want to gag.

A folded piece of paper flew out of the box and soared toward me like a paper airplane. I watched, mesmerized, until it ran out of steam and landed on my thigh. I picked it up. Two addresses were listed: ours, here in Scottsdale, in the left column under Jeffrey Dunwell; the other, Lariat Lane in Tempe, in the right column under Angelica Kravitz.

The only Angelica I knew worked in Jeffrey’s clinic. Angelica Woodward, the overly made-up, pint-size, permed receptionist who’d recently thrown out her husband because, as she’d put it, according to Jeffrey, “He’s a lowlife sack of shit.”

Was Kravitz her maiden name? Maybe she’d discarded her married name along with the sack. Very generous of her, giving back his name. Considering she’d kept everything else.

But if Jeffrey was having an affair, wouldn’t he have it with some brainless twitty half his age? Wasn’t that what middle-aged men did? Seriously, who had an affair with a brainless twitty old enough to be my…sister?

That I felt insulted rather than hurt was probably due to shock. In my stupor, still wearing Jeffrey’s love-garb, I ran to the kitchen. Asia glanced up in expectation, pouting when I didn’t stop to pet her. “What are you looking at?” I snarled. Tail straight in the air, she paraded over to her dish and waited for me to make amends. Figuring a little kitty karma wouldn’t hurt, I gave her a treat before pulling out the phone book.

Angelica wasn’t listed under Kravitz, but when I looked up Woodward, I hit pay dirt. A Trevor Woodward lived at the address listed on the packing slip.

Apparently, the information in the phone book was out-of-date. Obsolete, just like Trevor. Apparently, too, the lingerie store had made a fatal boo-boo. It had sent the underwear to the bill-to address instead of the ship-to.

“Where shall we send ze underwear, Monsieur Dunwell?” I imagined the little French salesgirl asking. She’d be bursting out of her bustier, teetering on four-inch heels.

“The lady is at this address,” Jeffrey would answer, scribbling away.

Jeffrey might have gotten away with it, if not for the screw-up. Even if I’d been in charge of the household accounts, he knew I’d never see the bill. He had a few credit cards apart from me entirely, which he used for his other business.

Clearly, not all his business was business.

I ran back to the bedroom and threw myself onto the bed, but the tears wouldn’t come. Maybe I wouldn’t let them. Maybe I feared I’d never be able to turn them off.

I rolled onto my back and stared at the ceiling. It’s just a fling, I told myself. Didn’t these things usually end? But at what price? Thoroughly chastised and emotionally castrated, the errant husband begs for forgiveness, and the betrayed wife is torn between saving her marriage and ripping out his heart.

That lowlife sack of shit.

An hour later, he called to say he’d be late and don’t hold dinner. I got dressed, tossed the tart’s tawdry togs into the trash, and headed out to Lariat Lane.

And then I saw him. With great flourish, he swerved his BMW into her driveway, jumped out of the car, and headed up the walkway. Coward that I was, I sped away.